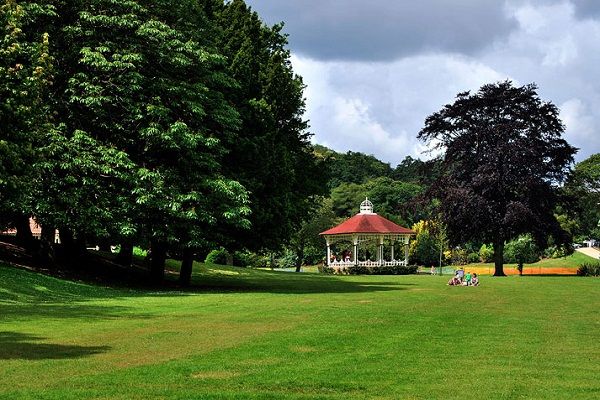 Alexandra Park lies with steep-sided, largely wooded valleys at its northern extreme. Evidence has been found that suggests an early medieval settlement in the area of Shornden, including fragments of pottery and the existence of structures that may have been charcoal kilns.

By the end of the 18th century, Tunbridge Wells was developing quickly as a notable south coast resort. In 1849 the Eversfield Waterworks Company was formed to supply water to the town's growing population. They leased land from the Eversfield Estate and by 1852 the Shornden and Harmers Reservoirs had been built.

Construction of the Buckshole reservoir had also started. At the other end of the park construction of the Tunbridge Wells to Ashford railway line had got underway and a huge embankment formed the southern boundary to the park.

In 1877 the Council commissioned Robert Marnock (one of the 19th century's outstanding horticulturalists and garden designers) to: "provide the bulk of the trees and shrubs which are likely to be required for the public park". A limit of £250 was set.

The park Alexandra Park was officially opened on June 26 1882 by the Prince and Princess of Wales (Princess Alexandra). A great procession took place from the railway station and once at the park the royal guests were introduced to Robert Marnock. Two memorial trees (believed to be limes) were planted and an album of photographs was presented to Princess Alexandra by Robert Marnock. The event attracted great interest in the media of the day, including the London Illustrated News. The Tunbridge Wells and St Leonards Observer gave a colourful account of the Park and concluded that Alexandra Park "will make one of the most picturesque and characteristic features of Tunbridge Wells".