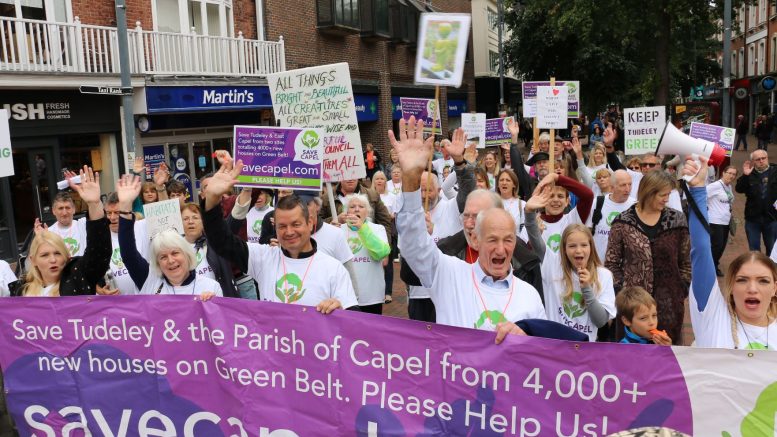 For the first time in more than twenty years, the Conservative Party has no overall majority on Tunbridge Wells Borough Council, as counting today revealed opposition parties gained 5 seats in Thursday’s local elections.

Years of drama over the abandoned theatre project and controversy over a massive housebuilding plan for Capel has worn down the Conservative’s normally rock solid majority in the Borough.

The Conservatives now have exactly half of the council seats, which is 24 of the 48 members elected.

Tunbridge Wells Borough Council (TWBC) has put forward plans for thousands of houses in the Capel area, filling in much farmland between Tonbridge and Paddock Wood in order to meet central government housing targets.

The victorious Liberal Democrat in the Capel seat, Hugh Patterson (pictured below) won 75% of the votes and said on twitter that it was an “overwhelming victory on a huge turnout. TWBC – this a rejection of the Local Plan by the community most affected!”

The turnout in Capel was 53%, which is the highest in the Borough emphasising the strength of feeling on the housing issue. The full result for Capel is below:

Below is some of the farmland near Five Oak Green that opponents in the Save Capel campaign are trying to preserve.

There were 3 Liberal Democrat gains in all (Capel, Broadwater and Pantiles/St Mark’s), while Labour gained Rusthall and the local group, Tunbridge Wells Alliance Party, also gained one seat.

The Alliance defeated the Conservative councillor Barry Noakes, who had represented the Goudhurst & Lamberhurst seat for the past 13 years.  The victory was by just 28 votes.

Meanwhile in Southborough, there was no Borough Council voting in the north and west of the town but in the seat of Southborough and High Brooms, the incumbent Labour candidate Dianne Hill (below) triumphed with 52 % of the vote – the same share as the last election five years ago.

Dianne Hill told Southborough News: “I love this community and I live here. I am really overwhelmed and so pleased and proud to be representing Southborough and High Brooms.”

After some confusion on PA news service about the totals, here is confirmation of the current councillors and their names:

Building of Southborough Hub Starts Soon Amid Concerns About the Cost