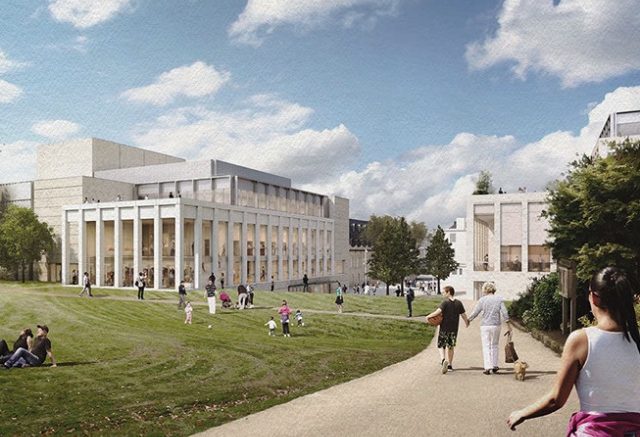 The plan by Tunbridge Wells Borough Council to spend £108 million to build a new theatre complex remains in limbo after a full council meeting was unexpectedly adjourned at 9.30pm.

Having spent three hours discussing other issues, councillors decided there was insufficient time left to debate the Calverley project.

The public gallery and an overflow room were packed amid widespread anger that the Council leaders were pressing ahead with the plans despite clear evidence the scheme lacks public support.

The council will meet again on Tuesday 8th October to decide whether to go ahead and sign a contract with developers to build the complex.

The Calverley Square scheme (illustrated below) is due to be built on part of Calverley Grounds in the centre of the town.

Earlier the councillor responsible for the scheme David Scott insisted that while the estimate of the cost of the Calverley scheme had recently gone up by £18 million that had been offset by lower borrowing costs.

Afterwards Councillor Scott said he hoped the project would be debated and approved at a special council meeting in the next 7 to 14 days. He told Southborough News the Calverley project was vital for the future prosperity of Tunbridge Wells.

You can listen here to the full 8 minute interview with Cllr Scott – the Conservative in charge of the project:

The council would get new offices and a new 261 space underground car park would be built which would encroach 55 metres into the parkland of Calverley Grounds. 60 trees (some shown below) are due to be felled.

The Alliance party was formed to stop the scheme and defeated the Conservative leader of the council in Borough elections earlier this year. The Alliance now has 6 councillors.

The vote on whether to go ahead was expected to be close. Two Alliance councillors were absent due to work commitments and one councillor Nick Pope is still unable to vote due to his wife’s interest in a nearby flat.

Alliance Chairman Robert Chris told Southborough News after the meeting that “the situation is a shambles.”

Earlier the meeting heard arguments from retailers in Tunbridge Wells who said they had been badly hit by the roadworks in the town centre which will lead to increased pedestrianisation.

The dissatisfied retailers included the owners of the Saltmarsh art shop, C and H Fabrics and Jeremy’s Home Store who said footfall was down by as much as 40%. The retailers said this had been “devastating”, the consultation wasn’t sufficient and the council had “no understanding of the vulnerability of the town centre.”