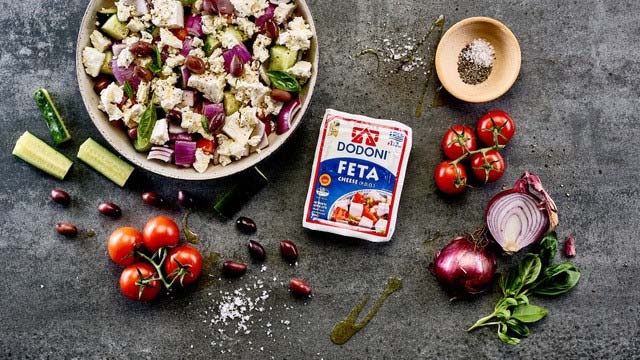 The leading dairy company in Greece, DODONI, have announced their traditionally made, market-leading products will be available widely across the UK for the first time – giving shoppers access to the very best in delicious, authentic Greek cheeses.

Foodies can find DODONI’s top of the range Feta and Halloumi in nearly 300 Marks & Spencer’s stores across the UK, with plans for the brand to widen distribution throughout the year.

Beginning as an agricultural cooperative back in 1963, DODONI has worked with small, artisan farmers for nearly 60 years, collecting milk daily from the best farms throughout the Greek region of Epirus. The Epirus region of Greece is a unique pastureland, rich in vegetation and rare biodiversity with thousands of herbs and plants which give DODONI Feta its unique taste.

The quality, flavour and passion put into every DODONI product has proven popular with shoppers across Greece, from the US to Australia, giving families and friends the authentic taste of real Greek cheese, you can’t find anywhere else.

With an unrivalled knowledge and experience of traditional production methods it’s no surprise that DODONI Feta is award-winning, made from 100% Greek pasteurised sheep and goat’s milk.DODONI understands that all the best things in life take time. By following a time-honoured process of collecting the best milk across the region, as well as using traditional cheese making methods, DODONI honours the ingredients to create a uniquely Greek flavour. Every block carries a part of the DODONI stamp, pressed into each piece of cheese so shoppers know they have a genuine DODONI Feta.

DODONI not only specialises in Feta, but also produces Halloumi in Cyprus combining their know-how and expertise in sourcing the best milk with Cypriot traditions of making Halloumi.

Working closely with the farmers and families of the region to create a sustainable and community-supporting business, DODONI Halloumi is produced near Limassol in Cyprus, using traditional Cypriot cheese-making methods with a unique and distinctive flavour derived from the exclusive use of 100% Cypriot cow, sheep and goats milk. The Halloumi made using these methods is regulated and trademark protected by the Ministry of Energy, Commerce and Industry in Cyprus.

Tom Seepers, CEO of DODONI commented, “We are delighted to bring a little bit of the Mediterranean to the UK. Life in Greece honours traditions that have been passed down through the generations, something you can taste in each of our cheeses. We work hard to ensure we keep the values of DODONI alive whilst delivering authentic quality and flavour every time.”

Head to our recipes pages for some culinary inspiration using DODONI cheeses.