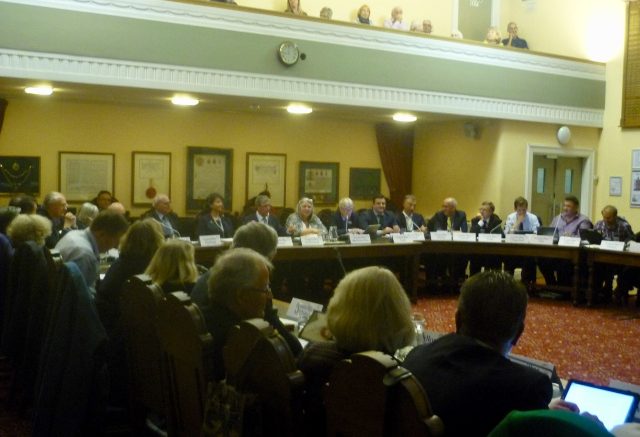 The plan for council taxpayers of Southborough and Tunbridge Wells to spend £108 million on a new theatre and office project has been thrown out by councillors at a meeting tonight.

Two votes were taken and the current scheme was rejected by 27 votes to just 12 supporters. There were 4 abstentions.

This was a heavy defeat for the Conservative run leadership of Tunbridge Wells Borough Council who wanted to press on with the Calverley Square scheme despite losing seats in this year’s local election.

The scheme would have built a new 1,200 seat theatre designed to support West End touring productions on the site of the existing Tunbridge Wells Great Hall car park.

Money would also have been spent on new Borough Council offices and a new replacement car park.

Earlier the Conservative in charge of the project David Scott had told the meeting that the £ 108 million scheme was “the best thing that could happen to this town.”

Cllr Scott (pictured above) argued a new theatre would increase the number of shoppers in the town. He suggested economic benefits of £34 million a year or £1.7 billion over the life of the project.

Cllr Scott argued that the alternative of upgrading the Assembly Hall theatre would involve a 9 metre increase in the ceiling height to incorporate a fly tower.

Cllr Scott said “any alternative (to Calverley project) would end up costing more.”

But Southborough’s only Conservative Borough Councillor Joe Simmons (below) opposed the Calverley scheme arguing that there was no evidence that residents wanted it.

Cllr Simmons said the scheme was “a huge financial commitment” and “a massive throw of the dice”.

Also opposing the scheme Bob Atwood – a former Conservative councillor – said the new theatre was not popular and “a flawed concept”.

Local resident Angela Funnell said the scheme was “mortgaging our childrens’ future away.” She said future generations would be crippled by a “massive debt”.  Angela Funnell said £108 million of debt plus interest payments would take the cost to £173 million. She said that was “an obscene amount of money.”

The scheme was supported by the principal conductor of the Royal Tunbridge Wells Symphony Orchestra who said the orchestra would be killed off if the Assembly Hall it used was shut for a four year refurbishment.

Cllr Sean Holden of the Conservatives opposed the scheme saying it would be a ” vampire” or “albatross around the neck of the council for decades”. His conclusion was greeted by the loudest cheer and applause from the public gallery to that point.

Cllr Holden (pictured above in right foreground) said he “didn’t go into politics to solve the ticket buying problems of middle-class theatre goers of Tunbridge Wells.”

Cllr Holden made his entire speech available to the press afterwards. See below:

Cllr Pound argued there were also big uncertainties about the funding. He said the hoped-for funding of £5 million from Kent County Council and £9 million from selling the existing civic complex were not guaranteed and without that cash there would need to be more borrowing.

Cllr James Rands of Liberal Democrats said “the basic numbers in the business case do not add up.” He said the new big theatre would not provide the affordable entertainment that the Assembly Hall does now and “No one really knows why we are doing this.”

Cllr Linda Hall of the Conservatives called herself a “fiscal Conservative.” She said “projects of this nature were best left to the private sector.”

Cllr Hall said the Conservatives would be “wiped out” at the next local election if they pressed on with the Calverley Square project. She said the “interest payments would absorb 20% of our annual council tax take” and money would be better spent on affordable housing.

By contrast, Conservative Cllr Jane March said the enhanced Assembly Hall was “not the right offer” and said the proposed Calverley scheme would benefit the community.

Cllr Tom Dawlings of the Conservatives said the council had a prudent funding scheme to pay for the new cultural and leisure facilities and “it was affordable”.

Cllr Christian Atwood spoke for the Tunbridge Wells Alliance which now has 6 councillors since it was formed to oppose the project. Cllr Atwood said there were alternatives that “did not chew up the listed park.”

The Council leader Conservative Cllr McDermott said there would be a long delay before any alternative plans could go forward.