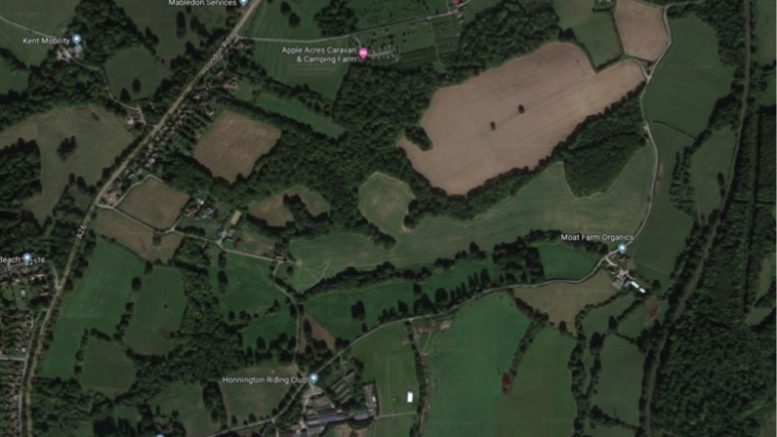 Residents have just five days to give their verdict on a plan by Tunbridge Wells Borough Council to transform many of the fields on “green belt” land between Tonbridge and Southborough into new housing.

The land in an Area of Outstanding Natural Beauty (AONB) that is currently centred on the historic Mabledon Farm (see red circle below) and Nightingale Farm between the A26 and Vauxhall Lane has been identified by the Borough Council as suitable for a “mixed use” development of between 50 and 120 housing units.

The mayor of Southborough, Councillor Alain Lewis (below) told Southborough News that the Town Council has expressed its concerns about the plan.  Cllr Lewis said: “We mess around with these things at our peril. It is a bit of a time capsule. Is a fine example of medieval countryside.”

Cllr Lewis continued: “If this development goes ahead, the potential is that we could end up building on the whole of the area. The A26 cannot sustain any more traffic – there are already too many cars on that road. Air quality is already poor along the A26.”

In the Local Plan section on the land around Mabledon Farm, Tunbridge Wells Borough Council says: “The properties and the wider surrounding agricultural land are in a single ownership offering an opportunity to develop an exemplar scheme inspired by the underlying historical character of the High Weald.”

The Draft Plan continues: “Planning an enlarged settlement here that reflects the historical evolution of farmsteads, hamlets, and small villages, and which remains connected to the surrounding land and its management, has the potential to demonstrate a new sustainable approach to development in the High Weald, making strong and positive contributions to the objectives of the AONB Management Plan.”

In addition there is a plan to develop Mabledon House to the west of the A26, which is a listed Grade II mansion (see below) associated with Decimus Burton, who was an important figure in the evolution of Tunbridge Wells. The house is set within a Grade II Historic Park and Garden that includes pleasure grounds, a cottage garden, and a quarry, although it is shielded from the A26 currently by trees and currently little known to residents.

The Local Plan says of Mabledon House: “The proposal for the whole site, which this policy supports, is for the development of a luxury hotel up to a maximum of 200 rooms and leisure development with spa and conference facilities, set within a restored historic park and garden and wider attractive landscape.”

For its latest Local Plan, Tunbridge Wells Borough Council has been told by central government to build 13,500 dwellings by 2036. This could increase the population by a quarter, so  worsening further road congestion and resulting in significantly reduced green spaces.

The village of Capel and town of Paddock Wood are likely to be worst hit with 4,500 additional houses planned to replace productive farmland. Capel residents have been protesting outside Council meetings and in the town for the past year (see below)

A local group, Hangman’s Hill Residents Association, has set up a Facebook page to post the latest news:
https://www.facebook.com/groups/hangmanshill/?epa=SEARCH_BOX

For more details on the pressure to build new housing on green belt land in the south east, here is a useful piece from the Campaign to Protect Rural England. Click here: https://cprekent.org.uk/planning/massive-increase-in-housebuilding-a-developing-tragedy-for-the-tunbridge-wells-countryside/?fbclid=IwAR3H0hxxlKVnGtlwpoq2VuXK0fbRsghB6GrhYLiCRSDnWXOJwPxRAOe2Vzk

Meanwhile, the Conservative leader of Sevenoaks District Council, Peter Fleming, appears to be refusing to build all the housing central government has ordered.  Sevenoaks has promised only 9,410 new homes – almost 2,000 fewer than the 11,312 homes they have been told to build by 2035.

Building of Southborough Hub Starts Soon Amid Concerns About the Cost

We are living in unprecedented times, and one thing to remind ourselves is that anxiety or mood problems are perfectly normal right now. The current climate would test anyone.  ‘Fight or flight’ and our nervous system We are mammals, and we are evolved to constantly monitor our surroundings for threats, take in information from what […]
The post Stress-free while working from home appeared first on Tunbridge Wells Lifestyle. Tunbridge Wells Lifestyle …

McCarthy and Stone, the developer behind the Tunbridge Wells retirement communities, The Dairy and Southborough Gate, has given a much-needed boost to…

The mayor of Southborough, Cllr Alain Lewis, has said the new community building under construction that is currently known as the “Southborough Hub” will have a new name suggested by residents. Cllr Lewis told Southborough News: “There should be community engagement to decide on the name, so we are open to suggestions.” The latest pictures … Continue reading Wanted! New Name for Southborough Hub Southborough News …