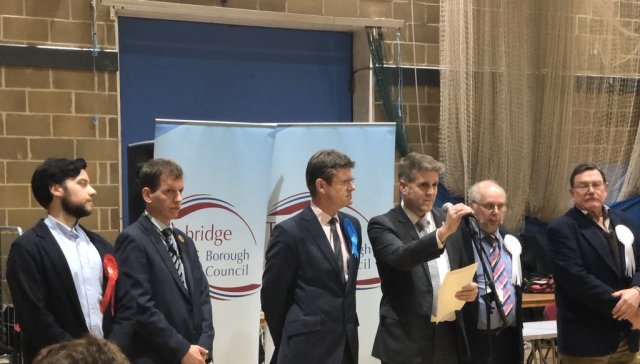 The sitting local Conservative MP, Greg Clark, won his seat comfortably in the General Election, receiving 55% of the votes cast and telling local media he was “thrilled” to be re-elected and “would be representing the whole community for the next five years”.

The Liberal Democrat candidate, Ben Chapelard (second from left above at the count last night), achieved second place with 28 %.

Mr Chapelard added 10,139 votes for the Liberal Democrats compared with the previous General Election two years ago, but he was still 14,645 votes short of the Conservative tally.

The Liberal Democrats had fought an active campaign with the Green Party having stood down in the Tunbridge Wells constituency as part of a national electoral pact to promote the cause of remaining in the European Union.

This is the full result from this time:

Labour – which had been second in 2017 – dropped to third place, losing 6,293 votes compared with two years ago.

In a statement on twitter, Greg Clark said he was: “Honoured to be re-elected to serve the people of Tunbridge Wells, and grateful for the strong support of my constituents. Time now to put the divisions of the last few years behind us and move forward together.”

This was the result two years ago in Tunbridge Wells:

Turnout yesterday was 73% – almost exactly the same as two years ago. Despite the wet chilly weather on Thursday, 441 more people turned out to cast a valid vote in the December election than they did in the summer of 2017.