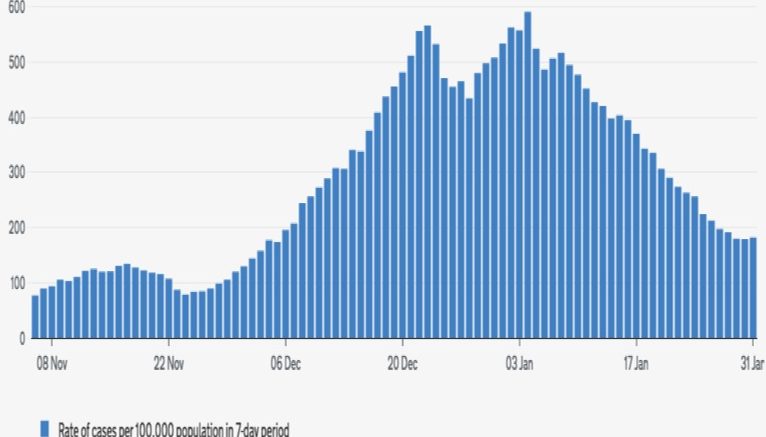 The closure of schools, hairdressers and other non-essential businesses has produced a 19% drop in Covid-19 cases in Tunbridge Wells Borough in January, compared with December’s record figure of 2,139 positive tests.

The weekly case rate trend is down in both Tunbridge Wells and Tonbridge, but national restrictions are likely to stay in place for many weeks to come with health services still under strain and cases still much higher than last August.

This is the graph for Tunbridge Wells showing the trend of weekly cases per 100,000 of population easing back to the levels of early December:

And this is the graph showing the weekly case rate per 100,000 population in Tonbridge Borough with the data for the last day of January now published:

The situation locally is now not as bad as the national picture. The latest weekly case rate per 100,000 of population for all of England is 258, compared with the Tunbridge Wells figure of 182.

Here are the figures over recent months for the cases of positive Covid-19 tests over the previous 7 cases per 100,000 of population locally:

There have been a total of 189 deaths within 28 days of a positive test in Tunbridge Wells.  52 of them were in the first wave of the crisis before September. The second wave has sadly been much worse with 137 deaths in the five months since then.

Plan to Replace Fields with New Housing Between Southborough and Tonbridge