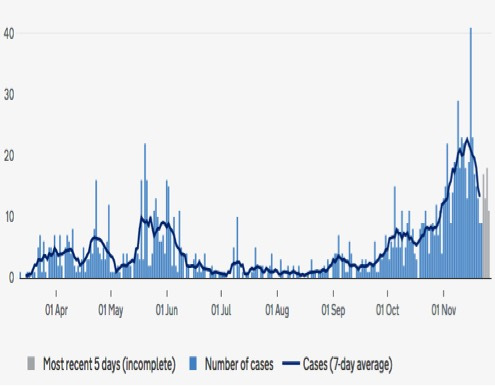 Despite the so-called “Second Lockdown” coming into force on November 5th, which meant only essential trips were allowed away from home, Covid-19 cases have more than doubled in Tonbridge and Tunbridge Wells over the past month.

The case rates are even worse in the north of Kent, which means all of Kent, including Southborough, is being moved into the toughest English level of restrictions -Tier 3 – when new rules start on Wednesday 2nd December.

Given the situation is complex and fast moving, official figures for how each local borough and selected university towns are faring will be updated daily on this page from now on below:

The figures are confirmed cases per 100,000 of population in the previous 7 days (some iPhones only display 4 columns at a time in portrait – 6 columns of dates should be visible if you drag your view to the last date Nov 23 or hold the phone in landscape mode):

Kent’s status in Tier 3 is bad news for the area’s pubs which will only be able to offer takeaway food, while pubs in neighbouring Sussex in Tier 2 can welcome inside customers if they are eating substantial meals.

Local MPs have called for the south of Kent to be given less onerous rules, but on Thursday a statement by the Health Secretary insisted that the medical resources for the whole county were already being stretched.

The Health Secretary, Matt Hancock’s statement said about Kent:
“Case rates are high and continuing to rise with large increases in case rates in almost all areas in the last 7 days. Some of the highest case rates in the country are currently seen in Kent. Rising case rates in people aged over 60 are a particular concern. Positivity is also increasing in 10 of the 13 lower tier local authorities. Kent And Medway STP are reporting hospital admissions are increasing and mutual aid necessary across the county.”

Figures in the chart below are for confirmed cases per day in the Borough of Tunbridge Wells since April, but given that testing has increased hugely since April, comparison back to April is of limited value:

As of 13th November 2020, 85 deaths linked to Covid-19 had been reported in Tunbridge Wells Borough.

All statistics are sourced directly from:
https://coronavirus.data.gov.uk/